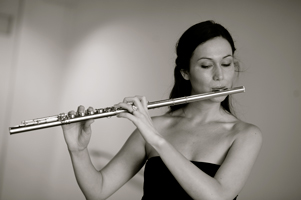 Jennifer Bradstreet completed a Bachelor of Music with Honours at the Sydney Conservatorium, before taking up a summer scholarship at St Andrews and Oxford in the UK, and then moving to London in 2010. She became a student at the Royal College of Music under British flautist Susan Milan, and graduated with a Postgraduate Diploma of Performance in 2011.

While in London, she played in side-by-side projects with the London Symphony and was invited onto the prestigious BBC Symphony Orchestral pathway. Many summer scholarships and international master-classes followed, in Germany, England and Italy.

In 2013, Jennifer accepted a Masters scholarship under James Kortum and Aldo Baerten (Belgium) at the Sydney Conservatorium, where she will complete her studies this year. She was a finalist in the 2013 Australian Flute Festival Orchestral Flute Competition and first-prize winner in the 2014 Australian Concerto & Vocal Competition (all instruments). She is active as a soloist and chamber musician, and also performs regularly with the Australian Opera and Ballet Orchestra in Sydney, with whom she has freelanced since 2013.