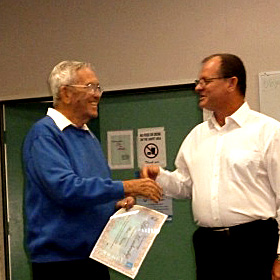 Sadly, Alan Dixon died in 2018. Alan was Secretary of North Queensland Ensembles Inc. / Barrier Reef Orchestra for eight years, retiring in 2016, having in fact been Secretary for half the life of the Orchestra at that time.

Alan had a strong commitment to community service and supported Rotary, Jaycees and was involved both as an actor, producer and committee member of Little Theatre both here and elsewhere.

His background as a Commonwealth Government officer (mainly in the Commonwealth Employment Agency) perhaps made him a particularly good candidate for Secretary. As our Secretary Alan kept meticulous records, but more than that he kept the committee in line insisting that chit-chat be replaced with clearly worded and properly passed motions. He was instrumental in making North Queensland Ensembles an incorporated body and we owe him a debt of gratitude for it.

The Orchestra has progressed greatly from quite modest and slightly precarious early days to what is now a financially strong, well organised and well established organisation with a strong audience and player base. Many people have contributed their volunteer support to achieve this, especially Alan.

Alan Nixon was granted Life Membership in recognition of his services and is remembered fondly for his sterling support.